8 green onions, sliced, divided Directions Preheat the oven to 350 degrees F (175 degrees C). Bake potatoes in the preheated oven until tender, about 1 hour, depending on the size of your potatoes. Set potatoes aside until cool enough to handle. Meanwhile, place bacon in a large, deep skillet. Cook over medium-high heat until evenly brown. Fill potato shells with mashed potato mixture. Place on ungreased cookie sheet. 5 Increase oven temperature to 400°F. Bake about 20 minutes or until hot. Tips from the Betty Crocker Kitchens tip 1 Make-Ahead Twice-Baked Potatoes: Make potatoes through Step 3. Wrap tightly and refrigerate up to 24 hours or freeze up to 1 month.

Lay the hollowed out potato shells on a baking sheet. Smash the potatoes into the butter, bacon and sour cream. Add the cheese, milk, seasoned salt, green onions and black pepper to taste and mix. Place potatoes directly on oven racks and bake until easily pierced with a fork, about 1 hour. Place on a large baking sheet and let cool until cool enough to handle. Step 2 Cut a thin layer off. 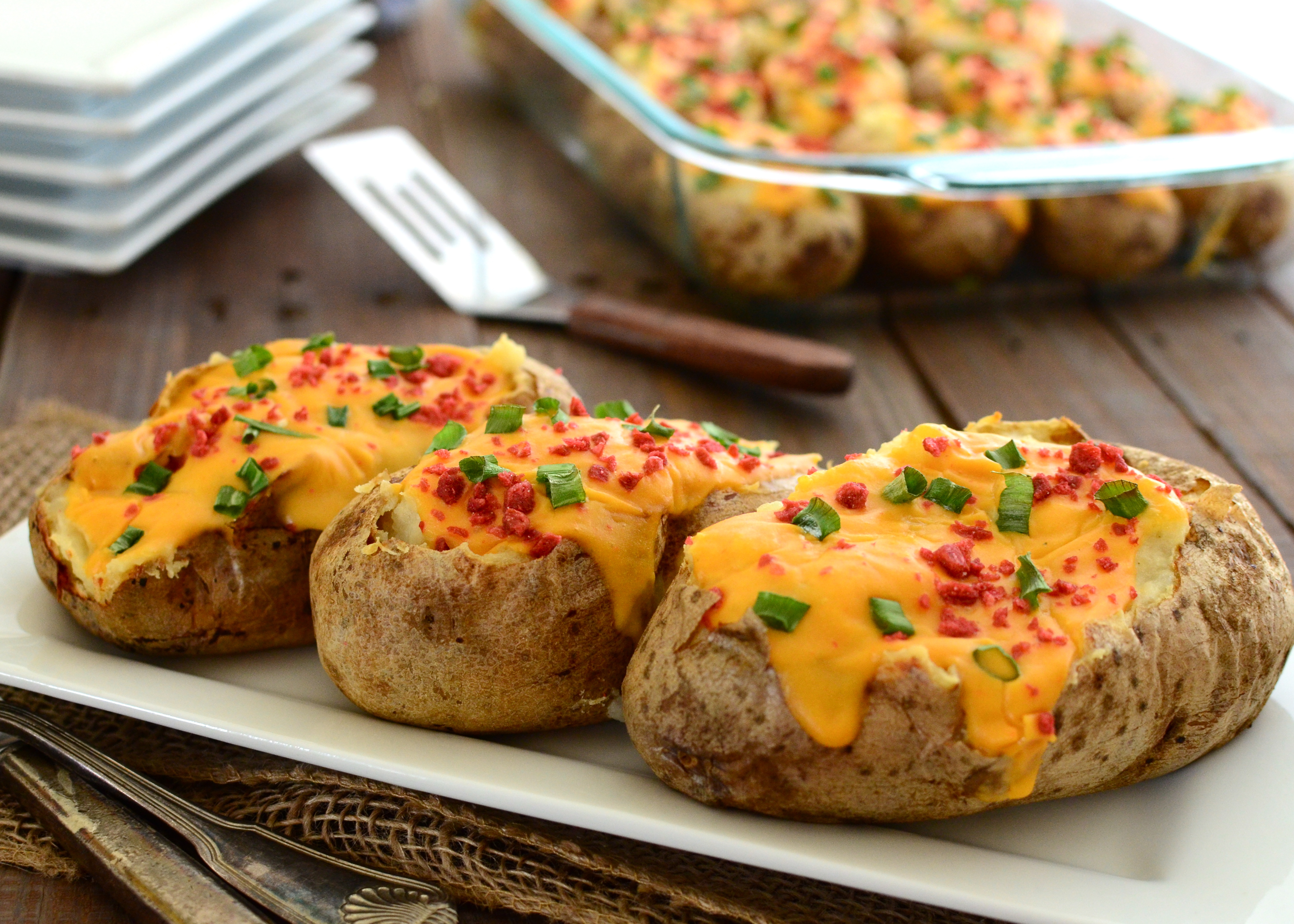 Bake directly on oven rack until very soft when squeezed and skins are crisp, 50-60 minutes. Let cool just until you can hold them. Step 2 Using a serrated knife, slice potatoes in half.

Remove the potatoes from the oven and cut them in half lengthwise. Set aside. Reduce the temperature of the oven to 350 degrees F. When the potatoes are cool enough to handle, scoop out the.

Bake the potatoes unwrapped for about 1 hour, or until soft, in the preheated oven. Place bacon in a large, deep skillet. Cook over medium high heat until evenly brown. Drain, crumble and set aside. Over medium-low heat melt the butter in a large saucepan. Combine onion, mushrooms, red pepper, garlic powder, pepper, chives and salt.

Twice-baked potato: Prepared using baked potatoes, the interior of the potato is scooped out after being first-baked. Additional ingredients are added to the potato that is scooped out, and the mix is then placed in the potato shells and baked again. Pictured is a twice baked potato with cheddar cheese, bacon and green onion topping. Zwieback

This twice-baked potato recipe is easy to make. Bake the potatoes: Use the oven, microwave, or air fryer to bake potatoes until tender. Cut each potato in half lengthwise and scoop out the insides with a spoon. Mash the potatoes and stir in the add-ins, spoon it back into the skins and sprinkle with cheese. Bake until heated through.

Bake potatoes: Preheat oven to 220°C / 430°F (200°C fan). Place a rack on a tray (recommended but not critical). Prick potatoes: Wash, scrub and dry potatoes well. Prick each potato 8 times with a fork. Oil and salt: Put potatoes in a bowl, pour over oil and rub onto potatoes. Then sprinkle over salt and use your hands to coat.

Frozen twice baked potatoes can be cooked without thawing. Remove from the freezer and unwrap. Place in a baking dish, and cover tightly. Bake covered for about 40 minutes at 425 °, then uncover and bake another 15-20 minutes until hot. But generally, frozen potatoes would be thawed first. 📖Potato Recipes Easy Roasted Red Potatoes

How do you make Twice Baked Potatoes? First, grab those taters and wash them, dry them with paper towels, prick 2-3 times with a fork, rub with oil and sprinkle with salt. Then place on a baking sheet and cook for about 45 minutes or until the potato is fork tender. Next, let the potatoes cool for about 15 minutes.

1/2 teaspoon pepper 2 cups grated sharp Cheddar cheese 2 green onions, sliced Directions Preheat oven to 400°. Rub potatoes with oil. Bake on a baking sheet 45 to 50 minutes or until potatoes are tender and skins are crisp. Meanwhile, stir together butter and next 5 ingredients in a large bowl. Remove potatoes from oven, and let cool 15 minutes.

Top your twice baked potato with sour cream, green onion and more bacon and cheese for tasty side dish. Add 1/2 of the shredded cheese, milk, seasoned salt, black pepper and 1/2 of the sliced green onion. Mix until well incorporated. Divide the mixture in four sections and fill the potato shells, mounding them slightly over the top.

Preheat oven and prep potatoes: Preheat oven to 400 degrees. Scrub and rinse potatoes clean and pierce potatoes several times on each side with a fork. Bake whole potatoes until softened through: Place potatoes in preheated oven and bake 75 - 80 minutes until fully cooked through (they should be fairly soft when squeezed).

To begin, slice baked and cooled potatoes in half lengthwise to form 8 "boats.". (1) Use a spoon to scrape out the flesh of the baked potato halves, leaving about a ¼ inch border all the way around. (2) In a large bowl, mash the potato with the rest of the ingredients. Taste the mixture and add more salt or pepper to your preference.

In a large bowl mix all the ingredients except 1/4 cup cheese, green onion and paprika with a hand mixer until well blended and creamy. If not creamy enough add a bit more milk. Taste and adjust seasonings if necessary. Spoon potato mixture evenly into shells. Top with remaining 1/4 cup of cheese and green onions. Sprinkle lightly with paprika.

Bake potatoes at 400°F for about 60-75 minutes or until they are easily pierced with a fork and give a little when pressed. Cut the potatoes in half lengthwise and scoop out the insides (leaving about 1/4" in the shell) and transfer into a large bowl. Mash the potatoes with a potato masher or fork.

Bake potatoes until tender (about 45 minutes to 1 hour). Remove potatoes from the oven & let cool. Slice each potato in half lengthwise & scoop out the inside, leaving the skin intact. Put the potato skins back in the oven to crisp them up. Mash the potato filling together with sour cream, buttermilk, cheese, & butter.

Guide On How To Make Omaha Steaks Twice Baked Potatoes. Preheat your oven to 350 degrees Fahrenheit. Wash and dry the potatoes. Using a fork, poke holes in the potatoes [ 1 ]. Place the potatoes on a baking sheet and bake them for 60-70 minutes or until they are tender. Once the potatoes are cooked and cooled, cut them in half and scoop out the.

Bake the potatoes at 400 degrees for 1 hour. Cut the baked potatoes in half lengthwise. With a spoon, scoop out some of the potato flesh into a large bowl, leaving about ¼ inch of potato inside the skin. Set aside the extra potato that was scooped out. Brush entire surface of each skin, inside and out, with butter.