Directions. Preheat oven to 350 degrees F (175 degrees C). Prepare a 13x9-inch casserole dish with cooking spray. Spread 20 potato nuggets in the casserole dish. Bake in preheated oven until warmed through, about 10 minutes. Heat a large skillet over medium-high heat. Lightly grease an 8 or 9-inch baking dish with cooking spray. Set aside. Brown the ground beef in a large skillet over medium-high heat. Drain excess fat. Add the onions to the skillet and sauté for 4 to 5 minutes until translucent. Add the garlic and cook, stirring frequently, for an additional minute.

Air-Fryer Cowboy Casserole. When it starts to get cold, I love to make this quick and creamy Tater Tot bake. It's a delightful homey dinner that's easy to put together. I make it ahead of time and keep it in the refrigerator. Then I just pop it into the air fryer when I get home. —Donna Donhauser, Remsen, New York. Cook and stir ground beef in a large skillet over medium heat until cooked through and no longer pink. Season with salt and pepper to taste, if desired.. Once the beef has browned, add cream of mushroom soup and stir well. Pour into a 9 x 13 baking dish and spread into an even layer. Add an even layer of tater tots. 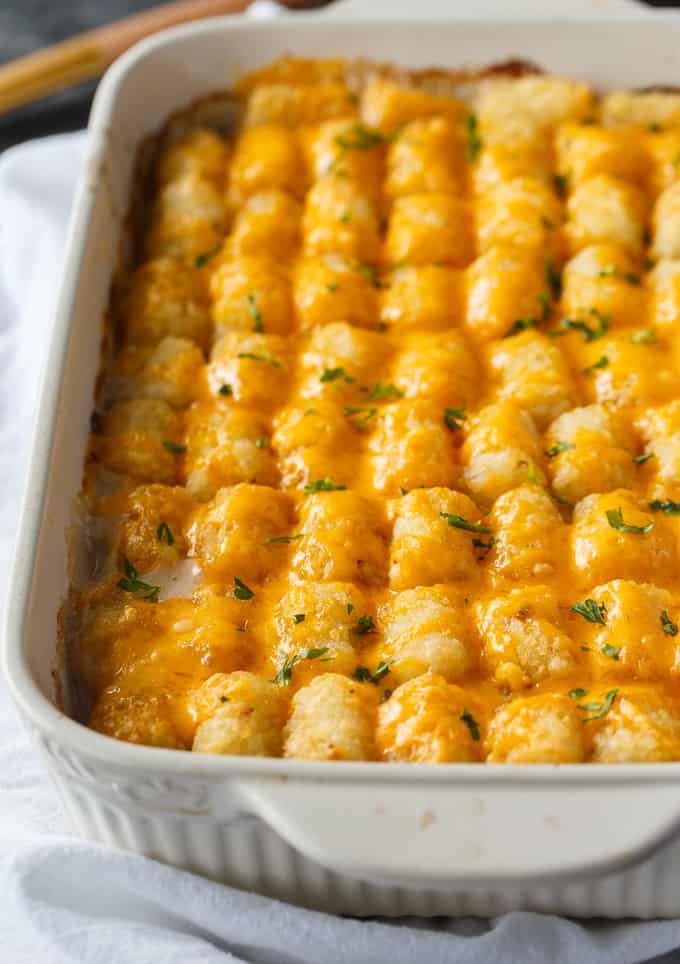 In a large bowl mix together the beef mixture with the sour cream, both cans of soup, corn, green beans, and 1 cup of the shredded cheese. Spread the beef and soup mixture into the prepared pan. Top with an even layer of tater tots and bake in the preheated oven for 50 minutes, until tater tots are brown and the casserole is bubbling.

In a 13" x 9" baking dish, spread out the raw ground beef evenly. Empty of Cream of Mushroom soup over the meat. Spread out an even layer. Cover the dish with a single layer of American cheese. Fill in any gaps for extra cheesiness. Top with a single, even layer of tater tots. Bake uncovered for 55-60 minutes.

Place the casserole in an oven that has been pre-heated to 350F degrees. Let the dish bake for about 30 to 35 minutes or until the soup is bubbling hot and the cheese is fully melted. Ovens do vary, so watch it carefully. The cheese melted right away on mine, but it took 30 minutes for the soup to get bubbly hot.

Directions. Preheat the oven to 350 degrees F. Add the oil to a large skillet over medium heat. Add the onions and cook until soft and beginning to brown, about 15 minutes. Add the beef to the.

1 Heat a large skillet over medium heat. Add the bacon and cook, stirring occasionally, until the fat has rendered and the bacon is crispy, 6 to 8 minutes. Transfer the bacon to a paper towel lined plate to drain the fat and cool. Step. 2 Place half of the tater tots in a single layer in the bottom of the dish. Step.

Instructions. Preheat oven to 375 degrees. Spray a 9×13 baking dish with non-stick spray. Add the ground beef, onion, and garlic to a large skillet and cook, breaking the meat up as it cooks, until the beef is cooked through. Drain the fat and add the beef mixture to a large mixing bowl.

Drain off excess liquid. In a large bowl mix together the beef mixture with the Campbell's Soup, ketchup, Worcestershire sauce, frozen mixed vegetables, and 1 cup of the shredded cheese. Transfer the mixture to a 12×8-inch shallow baking dish. Top the beef with tater tots. Bake at 425 degrees F for 20 minutes.

Step 1: Preheat oven to 350 degrees F (175 degrees C). Lightly grease an 8 or 9-inch baking dish with cooking spray. Set aside. Cook and stir ground beef in a large skillet over medium heat until no longer pink and completely browned, 7 to 10 minutes. Step 2: Season with salt and black pepper.

Instructions. Preheat the oven to 375 degrees. Heat the oil or butter in a large stove-top casserole dish or large oven-safe skillet to medium. Add the onion and sauté 4-5 minutes or until soft. Add the ground beef and cook another 5-7 minutes or until browned, breaking up the pieces with a wooden spoon as it cooks.

Prepare the filling, add the vegetables, and add the cheese. Don't add the tater tots. Cover and refrigerate for up to 2 days. Cover and bake it at 375° for 10 minutes. Remove from the oven and add frozen tater tots. Bake it uncovered for 40 minutes. Sprinkle additional 1/2 cup cheese, bake for 5 more minutes. Serve.

Heat the oven to 425°F. While the oven is heating, season the beef with salt and pepper. Cook the beef and onion in a 10-inch ovenproof skillet over medium-high heat until the beef is well browned, stirring to separate meat. Pour off any fat. Stir in the soup, ketchup and Worcestershire. Top with the potatoes.

Line up the tater tots in a buttered 9-by-13-inch baking dish. Add the olive oil to a large skillet over medium heat. Add the sausage and onion and cook, breaking the sausage up with a wooden.

Instructions. Preheat oven to 350 and spray the bottom of a 7" x 11" casserole dish with nonstick cooking spray. In a large bowl, mix the cream of chicken soup, sour cream, melted butter, garlic powder, and onion powder. Fold in the Tater Tots and stir until they are all coated with the mixture.

Cook beef and diced onion in 10-inch skillet over medium-high heat until beef is well browned, stirring to break up meat. Pour off any fat. Stir condensed soup, milk, 1 cup cheese, salt and pepper, and Worcestershire Sauce into the skillet. Spoon beef mixture into an 11x9-inch shallow baking dish.

Preheat the oven to 375°F. Brown ground beef and onion over medium heat until no pink remains. Drain any fat. In a bowl mix the vegetables, soup, milk, seasonings, beef mixture, and ½ cup shredded cheese. Spread into a 3qt (or 9×13-inch) casserole dish. Sprinkle the remaining cheese on top.

Spread the meat mixture evenly into the bottom of a 9×13 casserole dish. Pour the shredded cheese evenly across the top. Line tater tots in rows on top of the cheese until completely covered. Bake in the oven at 375 degrees for 25-30 minutes, or until tater tots are cooked through and slightly crispy on top.

Preheat the oven to 350 degrees. Add the ground beef, salt and pepper to a large cast iron skillet on medium high heat and cook until browned, about 5-7 minutes. Remove the ground beef and add in the onions, cooking for 5-7 minutes or until softened.

Fry until golden, around 2-3 minutes, then add some salt and pepper to taste and transfer to a 9x13 baking pan or oven safe pan of equivalent size. Combine the vegetables and the soup. Pour over top of the hamburger. Sprinkle the cheese on top evenly. Place the tater tots in an even layer on top of the soup mixture.