Preheat the oven to 500 °F. Line a 10" spring form pan with 2 sheets of parchment paper, leaving a 2" border of paper extending from the top of the pan. The paper will not lie flat against the pan, this is ok. Place the cheese and sugar in the bowl of a food processor. Pulse a few times to combine the ingredients. Instructions. Preheat your oven to 425 degrees Fahrenheit and line a 9-inch springform pan with a large sheet of parchment paper. Add the room temperature cream cheese to a large bowl and mix well with a hand mixer until creamy and smooth (you can also use a stand mixer fitted with a paddle attachment).

Preheat the oven to 410°F (210°C). Using an electric mixer, whisk, or a metal spoon (the classic La Viña way!) combine all the ingredients in a large bowl until smooth and creamy. Line a 10 inch (25 cm) springform pan or round baking pan with enough wax or parchment paper that it extends past the edges of the pan. Instructions. Prepare a 9-inch springform pan with parchment paper, and preheat an oven to 200c (400f). In a big mixing bowl, add the room temperature cream cheese, kosher salt, sugar, lemon zest, and vanilla extract, and mix with an electric hand mixer until the cream cheese is creamy.

San Sebastian Cheesecake Life Is Full Of Goodies In 2020 Cheesecake 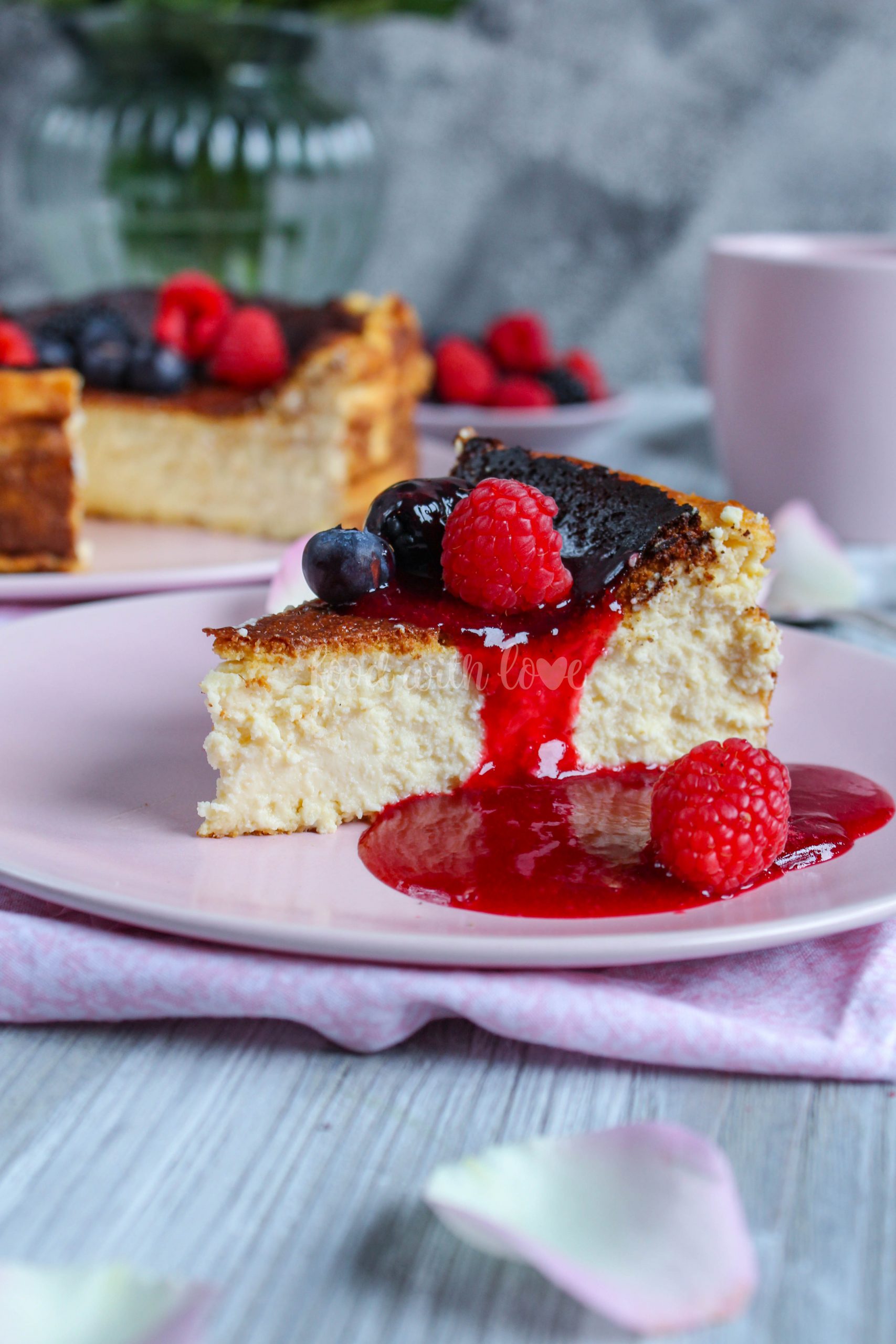 Add confectioners sugar and beat, Add the eggs one by one and beat them up, Add the flour gradually, beat until no lumps, Grease a 21 cm springform pan, cover with parchment paper and grease again, Pour the cheesecake mixture into the mold, Bake in a 200 C degrees pre-heated oven until brownish. Get the App.

Method. In a large bowl and with the help of a whisk, beat all the ingredients together until a smooth batter is achieved. Using some soft butter, grease a 26cm in diameter clip-on cake tin, pour the mix in and bake in a pre-heated oven at 200ºC/400ºF/Gas Mark 6 for 50 minutes. To test if the cheesecake is ready, pierce the centre with a.

Known simply as tarta de queso or gazta tarta in its native Basque, this simple yet incredibly creamy cheesecake variation is a decades-old local specialty of the La Viña Bar in San Sebastián. The recipe is a simple combination of classic cheesecake ingredients such as sugar, heavy cream, eggs, and cream cheese, but unlike its more popular counterparts, this Basque version does not have any.

What is San Sebastian cheesecake origin? In the 1990s, the San Sebastian dessert was first created by chef Santiago Rivera. It was called tarta de queso, meaning cheese pie, and was served at La Viña bar in San Sebastian's old town in the Basque region of Northern Spain. In 2013 three American chefs, Grant Achatz, Mike Bagale, and David Beran.

Preheat the oven to 220°C (430°F) and set the rack to middle position. Line a 5 inch wide by 3 inch high cake pan with parchment paper or use a non stick pan and set aside. Add the cream cheese and sugar into a medium size bowl and stir using a whisk until the cream cheese mixture is soft and smooth about 2-3 minutes.

In a large mixing bowl, use a hand-held whisk to beat the cream cheese just until smooth. Alternatively, use a food processor. 1¾ pounds cream cheese. Beat in the cream and yogurt, followed by the sugar, salt and lemon zest, if using. 1 cup heavy cream, ½ cup Greek yogurt, 1 cup sugar, 1 teaspoon salt, 1 lemon.

Preheat the oven to 425°F / 220°C and line an 8-inch cake pan with two pieces of parchment paper. There is no need for any grease or spray, and the paper does not need to be neat. Beat the sugar and cream cheese together on medium speed until smooth and combined. 3 cups Cream Cheese, 1 cup White Sugar.

La Viña, a restaurant that opened in San Sebastián—the Basque region's capital city—60 years ago, serves an improbable tarta de queso. Its blackened top, surrounded by a flutter of burnt parchment paper, hides a center the texture of soft custard. "It breaks all the rules of the porcelain-white, even-textured cheesecake [Americans.

This mini burnt cheesecake recipe is a bite-sized interpretation of the classic Basque or San Sebastian Cheesecake. Made famous by La Viña, in San Sebastian, Spain, these are the perfect little snack cheesecakes or a great dessert for a party or pot luck. Prep Time 15 minutes.

Preheat the oven to 220°C (425°F). Add all the ingredients to a large mixing bowl and beat with an electric mixer, whisk, or a metal spoon (like they do at La Viña!) until the mixture is smooth and creamy. Line a springform pan with parchment paper, leaving enough at the edges so that it sticks out over the side of the pan.

Start by pre-heating your oven to 200c/400f. Also line an 8 inch cake tin with a large piece of baking paper. In a large bowl, add the cream cheese, sugar, corn flour and salt. Beat these together until smooth. Add half of the double cream into this, mix until smooth then mix in the rest of the cream.

San Sebastian cheesecake is known by many different names, including La Vina cheesecake, Basque cheesecake, burnt cheesecake or even Spanish cheesecake.A chef invented it at La Viña, a local pintxos bar in beautiful San Sebastian in the Basque region in Spain, hence the name.

There are scores of photos on Instagram featuring the San Sebastian Cheesecake with the Galata Tower in the background. Rivera says that the dessert's notoriety may have first been sparked by the praise that the The New York Times bestowed upon La Viña's recipe in 2021. Rivera, the author of that recipe, describes the cake as follows.

San Sebastian Cheesecake Life Is Full Of Goodies In 2020 Cheesecake