Dissolve yeast in warm water in a large bowl. Let stand about 10 minutes, until frothy. Meanwhile, generously oil a large bowl. Stir sugar, milk, egg, and salt into the yeast mixture. Mix in enough flour to make a soft dough. Knead dough on a lightly floured surface until smooth, 6 to 8 minutes. Place the dough in a greased bowl, cover, and let it rise until doubled, about 50 to 60 minutes. Divide the dough into eight equal pieces (about 65g each). Shape each into a ball, cover, and let rest for 20 minutes. While the dough is resting, preheat a cast iron pan over medium-high heat, or an electric griddle to medium-high.

Transfer the flour to a flat surface and make a well in the middle. Add the yeast mixture, yoghurt, salt and oil, knead the dough until the surface becomes smooth and shiny, about 10 minutes. Cover the dough with a damp cloth and let it rise in a warm place (for example: beside the stovetop or warm oven). Heat a pan; once the pan is hot, place the rolled dough on the pan with the cilantro and seeds facing up. Cook on medium heat for a minute or two until you start seeing air bubbles. Flip the bread and cook for another minute until you start seeing bubbles again. Brush the cooked naan with butter and set aside. 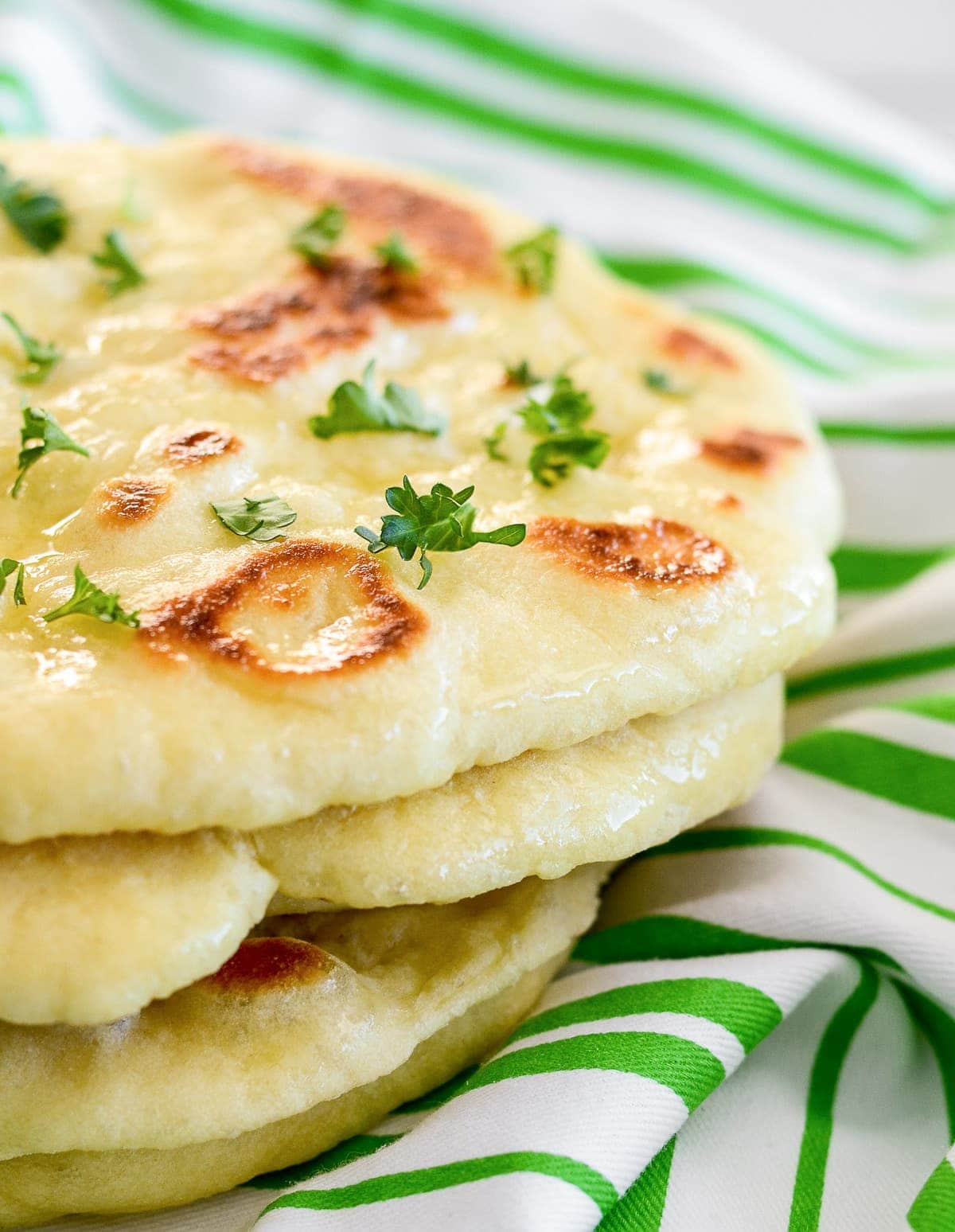 Remove the naan from the skillet, brush with a bit of butter and sprinkle with a little coarse sea salt. Place the naan in a tea towel-lined dish. Repeat with the rest of the naans and serve.

Combine warm water, sugar, and yeast in a bowl. Let stand for 5 minutes until foamy. Add salt and flour. Mix thoroughly. Knead dough on a floured workspace about 20 times and form into a tight ball.

Make Naan dough. Mix dry and wet ingredients - In a large bowl, mix together the dry ingredients (flour, sugar, salt), then add the foamy yeast, butter / ghee, and the milk + eggs; Mix - Start by mixing with a firm rubber spatula or a wooden spoon to bring the dough together.

Start by activating the yeast. Combine the warm water with the sugar and yeast. Let sit for 10 minutes until foamy. It should smell bread like. Add the flour, baking powder and baking soda to a large bowl. Then add the warm milk and yogurt to the yeast mixture. Pour the yeast into the flour.

For a crunchy crust, bake the naan in the oven until slightly crispy on top before adding the tomato sauce. —Kimberly Berg, North Street, Michigan. Go to Recipe. 3 / 16. Taste of Home.

How to Make Naan Bread: Combine dough ingredients: In a large bowl combine the flour, sugar, instant yeast and salt. In another medium sized bowl whisk together the warm water, yogurt, and olive oil. Add the wet ingredients to the dry ingredients until the dough starts to come together. Lightly flour your your hands and knead into a ball.

Prepare the dough and roll it as directed in the recipe; brush with ghee and sprinkle with nigella seeds. Heat a skillet over medium-high heat and brush it lightly with oil (or ghee). Add one naan and cook for about 30 to 40 seconds. Flip it and cook for another 10 to 15 seconds. Repeat with the remaining dough.

In a medium mixing bowl, add the flour, yogurt, and baking powder. Add the salt (optional) and mix with a wooden spoon. Transfer the dough to a floured surface and knead the dough for a few minutes until a soft dough forms. Roll the dough and divide it into 5 equal pieces. Shape each dough piece into a ball.

Put 125ml warm water into a bowl and sprinkle over the yeast and 1 tsp of the sugar. Leave for 10-15 mins or until frothy. In a larger bowl, put the flour, remaining sugar, ½ tsp salt and baking powder.

Add the rolled out dough one at a time. Let cook on the first side for about 1-2 minutes, until bubbles have formed all over the top of the dough. Use a spatula to flip the naan to cook the other side. Pay attention to the heat and adjust between medium and medium low. Everyone's stove is going to be different.

Roll each portion into an oval shape, roughly 1½cm thick. Heat a large non-stick frying pan over a high heat, add a naan bread and cook for 5 to 6 minutes, or until cooked through, turning halfway. Brush with a little of the remaining ghee, sprinkle over a few nigella seeds and a small pinch of salt. Keep warm in the oven while you make the.

Make sure that the dough is of an even thickness and not rolled out too thin. It needs to be about 3-5mm (0.12 - 0.19 inch) thick, otherwise is won't puff up properly. Roll out about 3- 4 flat breads then start cooking. While one flat bread is cooking, roll out another while keeping an eye on the one in the pan.

Whisk well. Add the mixture to the flour slowly and knead into a soft dough ball. Cover and keep in a warm place for about one hour or until it has doubled in size. Preheat oven to 550 F (290˚C) with a pizza stone on the highest rack inside. Once the dough has risen, lightly oil hands, punch down the dough and knead.

Put the yeast, sugar and two tablespoons of warm water in a bowl and stir well. Leave until it begins to froth. Put the flour and salt into a large mixing bowl and whisk to combine. Stir the.

Then scroll down to the recipe card for the full ingredients list and method. 1 - mix all ingredients together in a large bowl. 2 - Bring it all together into a dough. 3 - form into a ball of dough, then knead briefly. 4 - Divide the dough into small balls, then roll each one into rounds or naan shapes.

Directions. Combine water, yeast, and sugar in a large bowl. Let stand until bubbly and frothy, about 10 minutes. Stir in milk, egg, salt, and enough flour to make a soft dough. Knead dough on a lightly floured surface until smooth, 6 to 8 minutes. Place dough into a well oiled bowl, cover with a damp cloth, and set aside to rise until the.

Heat a non-stick saucepan on medium heat. When hot, place flattened dough and cook for 3 minutes, before flipping and cooking a further 2 minutes. Repeat until all the naan bread is cooked. Once cooked, if desired, lightly brush the tops of each naan bread with melted butter.

Sprinkle the yeast on top of the water and give it a quick stir, then let the mixture rest for 5-10 minutes until the yeast is foamy. Mix the dough: Add the flour, yogurt, salt, baking powder, and egg. Using the dough attachment, mix the dough on medium-low speed for 2-3 minutes until smooth.