Use your finger to cover the funnel hole; pour in 1 cup of batter. Starting in the center of the skillet, remove your finger and move the funnel in a swirling motion to make a 6- or 7-inch round. Fry in hot oil until bottom is golden brown; flip and continue cooking until golden brown all over, about 1 minute per side. Drain on paper towels. In a large bowl, beat eggs. Add milk, water and vanilla until well blended. In another bowl, whisk flour, sugar, baking powder and salt; beat into egg mixture until smooth. In a deep cast-iron or electric skillet, heat oil to 375°. For each cake: Cover the bottom of a funnel spout with your finger; ladle 1/2 cup batter into the funnel.

Blend flour, sugar, water, milk, egg, baking powder, vanilla extract, and salt together in a blender until smooth. Add more flour if batter is too watery. Put your finger over the hole of a funnel and fill funnel with batter. Hover filled funnel over the skillet, release finger, and swirl batter into the hot oil; cook until golden brown, about. Heat ½" to 1″ of peanut oil in a skillet. Pour batter into a funnel or squeeze bottle while using your index finger to stop the flow of the batter. Bring the funnel over the hot oil and release your finger to start a stream of batter while moving the funnel in a circular motion to create spiral-like shapes. Fry for 2 to 3 minutes until.

Funnel Cake Made To Be A Momma 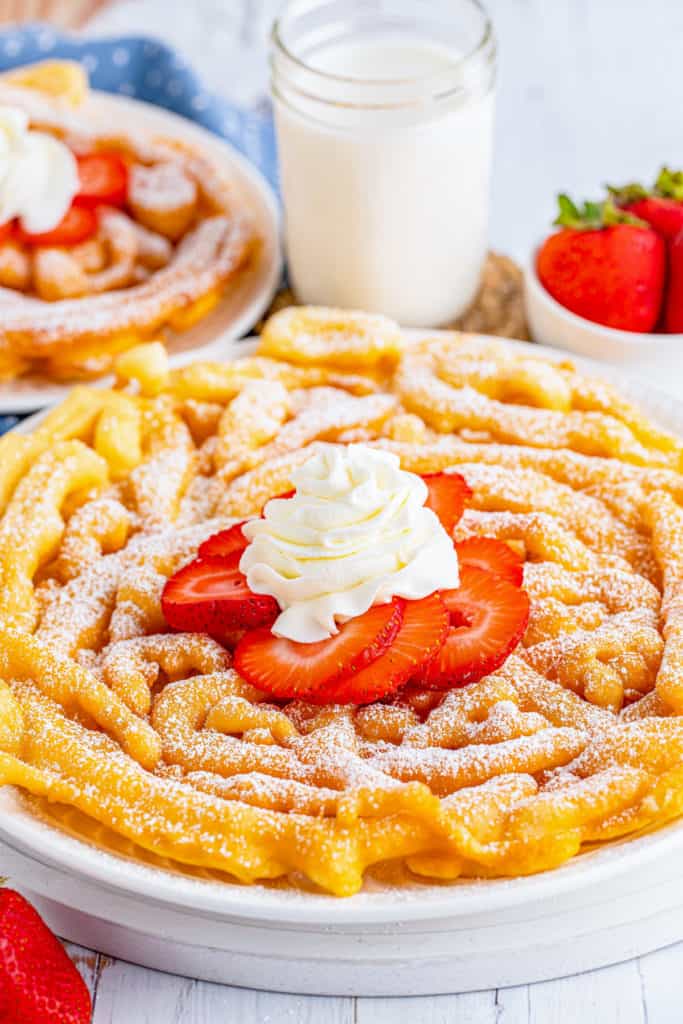 Add up to 3 tablespoons milk to loosen the batter, if needed. Heat about 2 inches of canola oil in a large high-sided skillet or pot over medium-high heat until a deep-fry thermometer registers.

Heat oil to 375°F in a deep-fat fryer or larger heavy-bottomed skillet. In a large bowl, beat eggs. Add milk, water, and vanilla until well blended. Add the flour, sugar, baking powder and salt; whisk until smooth. Cover the bottom of a funnel spout with your finger and carefully ladle ½-cup batter into the funnel.

In a large liquid measuring cup or batter bowl with a spout, whisk together milk, egg, water and vanilla. Add sugar, baking powder and salt and whisk until combined. Add the flour, and whisk until completely smooth. Set aside. In a medium, deep-sided pan or pot, heat 1" of oil to 375°F over medium-high heat.

Funnel Cakes. By Ree Drummond Published: Mar 9, 2010. Funnel Cakes, for those of you who aren't familiar, are a standard carnival treat. Made by pouring a thin batter through—get ready—a FUNNEL (get it?) directly into hot oil and fried until golden, then topped with plenty of powdered sugar and eaten while crisp and warm…wow.

In a bowl, combine eggs, milk, and brown sugar. In a separate bowl, combine flour, baking powder, and salt. Add the dry ingredients to the wet ingredients and beat until smooth. Add enough oil in an electric skillet or deep fryer so the depth is about 4 inches. You want to have an extra two inches of oil so the funnel cake can cook evenly.

Heat the oil to 375°F in a deep fryer, or a deep, heavy pan with sides at least 3" deep. In a large bowl, beat together the milk and eggs. Whisk together the flour, baking powder, 2 tablespoons sugar, cinnamon, and salt. Stir into the egg mixture until smooth. Pour 1 cup of batter into the dispenser.

Heat the oil over medium-high heat until it registers 360 degrees F on a deep-frying thermometer. Line a baking sheet with a metal cooling rack or a few layers of paper towels. Meanwhile, whisk.

Pour oil into the pot set over medium heat. Heat to 375°F (191°C). I usually prepare the batter (next step) as the oil is heating. Whisk the flour, baking powder, salt, and cinnamon together in a large bowl. Set aside. In a medium bowl, whisk the eggs, brown sugar, vanilla, and milk.

Funnel cakes are made by pouring batter into hot cooking oil in a circular pattern and deep frying the overlapping mass until golden-brown. The batter is commonly poured through a funnel, creating its texture and giving it its name. When made at concession stands, a pitcher with an integral funnel spout is employed.

Directions. In a large bowl, combine the milk, eggs and sugar. Combine flour and baking powder; beat into egg mixture until smooth. In a cast-iron or electric skillet, heat 2 inches oil to 375°. Cover the bottom of a funnel spout with your finger; ladle 1/2 cup batter into funnel. Holding the funnel several inches above the skillet, release.

Fill a 10-inch (or larger) heavy skillet halfway with the vegetable oil. Over medium heat, bring the oil to 350 F. The Spruce Eats / Kristina Vanni. Combine the pancake mix, sugar, and vanilla extract in a medium bowl. Whisk in the water, a few tablespoons at a time, until desired consistency is achieved.

How to make Funnel Cakes. First, in a large bowl, whisk together the milk, eggs, and vanilla. Then in another bowl, whisk together the flour, sugar, baking powder, cinnamon, and salt. Now add the dry ingredients to the wet ingredients whisking until the mixture is smooth and combined. Next, in a medium-sized heavy pan, heat the oil to 375 degrees.

Just like the ones you get at the fair! This recipe comes from an old Pennsylvania Dutch cookbook that was in my grandmothers collection from Dutch Pantry Re.

Funnel Cake is a classic fair favorite! Deep-fried to perfection and then dusted with powdered sugar, you won't believe how easy it is to make this at home w.

Pour mixture into a pitcher or squeeze bottle. In a thick-bottom pot, heat oil to 375°F. Test oil by dropping a small spoonful of batter in oil. If it rises to surface quickly, oil is ready. Hold the jug or squeeze bottle with the funnel cake mixture 3-4 inches above the oil (wear an oven mitt for safety).

STEP 2. Whilst the oil heats up, whisk together the flour, icing sugar, baking powder, milk, eggs and a good pinch of salt. Transfer the batter to a disposable piping bag and secure the end with a peg (you'll need another peg for the other end, once you've cut it open.) STEP 3. When the oil is hot, snip off the end of the piping bag to make.

Set a large 6-8 quart pot over medium-high heat. Add the oil, and clip a cooking thermometer to the side of the pot. Make sure the tip of the thermometer is down in the oil. Heat the oil to 375 degrees F. Set a paper towel lined tray to the side for the finished funnel cakes. Meanwhile, set out a mixing bowl.

Gather the ingredients. In a large bowl, whisk together the eggs and milk. In another large bowl, combine the flour, sugar, salt, and baking powder. Gradually combine the wet and dry ingredients. Beat until very smooth. Spoon the funnel cake batter into a plastic zip-top bag.

Funnel Cake Made To Be A Momma