Best Classic French Onion Soup Once Upon A Chef 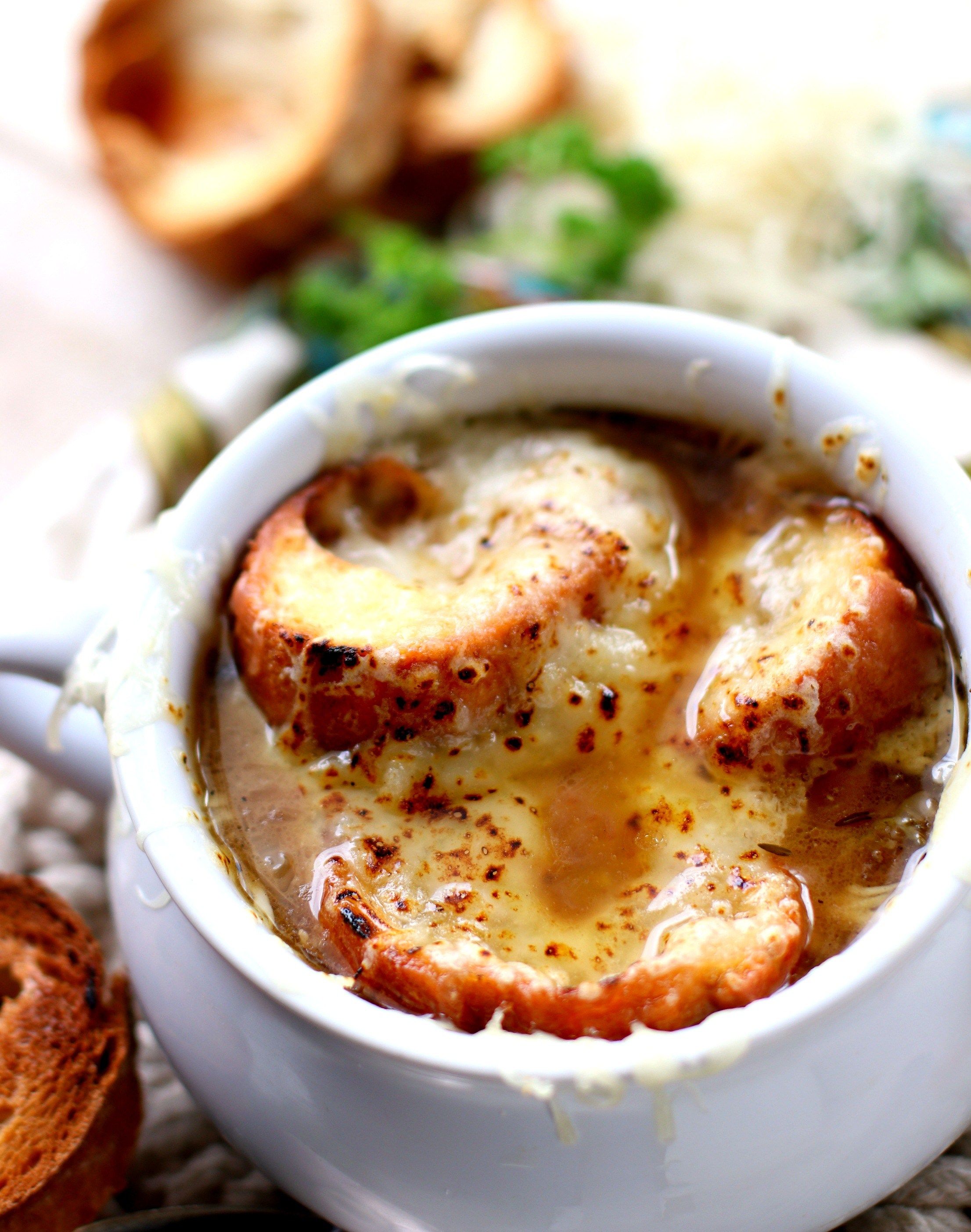 Our taste tests revealed the combination of an all-beef broth with white wine as the clear winner, as used in this Gourmet French Onion Soup. The beef broth (obviously home-made is best, but store.

Directions Melt the stick of butter in a large pot over medium heat. Add the onions, garlic, bay leaves, thyme, and salt and pepper. When you're ready to eat, preheat the broiler. Arrange the baguette slices on a baking sheet in a single layer. Sprinkle. Ladle the soup in bowls and float several.

Bring to a boil, then reduce heat and simmer for 30 minutes. Pre-heat oven to 325 degrees F. Drizzle both sides of french bread slices with olive oil, and place on a baking sheet. Cook the bread in the oven for 15 minutes on each side. Taste soup, and add salt and pepper as needed, then remove the bay leaf.

Melt butter in a heavy soup pot or Dutch oven over medium-low heat. Add onions and cook, covered, for 20 minutes. Place soup pot into the oven with the lid slightly ajar to ensure the onions will brown. Allow onions to cook in the oven for 1 hour, stirring at least once during the cooking process so onions won't stick and burn.

Lower heat to medium-low and cook, stirring frequently, until onions are very sweet and a rich golden-brown color, 1 to 2 hours. If browned onion juices on bottom of pot threaten to burn, add 1 tablespoon (15ml) water, scrape up browned bits, and continue cooking. Season with salt and pepper. Vicky Wasik.

Cook slowly, with the lid on, for about 15 minutes. Stir occasionally. Remove the lid, turn the heat up to medium, add the salt and sugar, and stir often for about 40 minutes (mine took 45), until the onions are a deep golden brown. Add the flour and continue to cook and stir for another 3 or 4 minutes.

Meanwhile, slice French bread into 3/4 slices and butter both sides. Toast slices on griddle until golden brown. Ladle soup into an ovenproof bowl, add toasted bread and cover with cheese. Place ovenproof bowl on a baking sheet lined with tin foil. Bake at 350 °F or 5 minutes under a hot broiler.

Instructions. Melt butter in a large stockpot or Dutch oven over medium heat. Add onions, and cook, stirring often, until deep golden brown and caramelized, about 30-40 minutes.*. Stir in garlic until fragrant, about 1 minute. Stir in wine, scraping any browned bits from the bottom of the stockpot.

In a large pot over medium-high heat, melt the butter. Add in the onions and sauté, stirring often, until softened, about 10 minutes. Reduce heat to medium, stir in the salt and sugar; cook for another 35 minutes, stirring occasionally (every 5 minutes or so), until onions are caramelized and almost syrupy.

Deglaze: Add wine, then simmer rapidly for 2 minutes until mostly evaporated, stirring to scrape the bottom of the pot. Flour: Sprinkle flour over the onion and cook for 1 minute. Add broth & herbs: Add broth, thyme and bay leaves. Simmer: Cover, lower heat so it's simmering gently then simmer for 30 minutes.

Taste the soup and season with salt and pepper as needed. Toast the bread. Preheat oven to 400°F. While the soup is simmering, slice the baguette into 1-inch thick pieces and arrange them in single layer on baking sheet. Bake for 6-8 minutes, until the bread is toasted and golden around the edges.

Method. Melt the butter with the olive oil in a large heavy-based pan. Add the onions and fry with the lid on for 10 mins until soft. Sprinkle in the sugar and cook for 20 mins more, stirring frequently, until caramelised. The onions should be really golden, full of flavour and soft when pinched between your fingers.

Add the onion and fry over high heat for few minutes. Cover, lower the heat and simmer for about 10 minutes. Remove the lid, sprinkle in the sugar and some salt and pepper, and fry for a few minutes.

In a large Dutch oven or other large pot, melt 3 tablespoons butter over medium heat. Add the oil and onions; cook onions are until softened, stirring occasionally, about 15 minutes. Add the salt.

Stir the onions constantly until they are softened and lightly browned. After the onions are deeply caramelized, sprinkle the flour and thyme and mix until the flour is no longer visible. Add the beef broth and vinegar, stir, and simmer until thickened. Divide the soup into bowls and top with the bread and cheese.

Sautee over medium heat until onions have browned (40 min). Add Garlic and saute for 1 minute until fragrant. Add Dry Sherry and cook down until all the wine has evaporated, scraping the bottom to deglaze the pan. Add beef stock along with aromatics (bay leaf and thyme), salt, and pepper.

Divide the soup among the bowls and top each one with 2 tbsp of the cheese. Place 3 slices of bread over each bowl and top with the remaining cheese. Broil for 5 minutes or until the cheese is golden and melted.

French Onion Soup Classic Recipe How To Feed A Loon