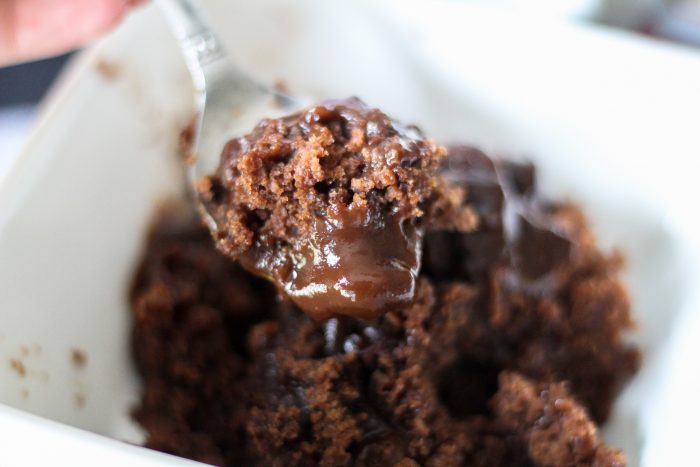 Directions In a large bowl, combine the cake mix, water, eggs and oil; beat on low speed for 30 seconds. Beat on medium for 2 minutes. Transfer to a greased 4-qt. slow cooker. In another bowl, whisk milk and pudding mix for 2 minutes. Let stand until soft-set, about 2 minutes. Spoon over cake batter; sprinkle with chocolate chips.

Step One: Spray the 6-quart crockpot with cooking spray. Step Two: Mix the flour, cocoa powder, baking powder, sugar, and salt in a bowl. Set it to the side. Step Three: Using a different mixing bowl, combine the oil, vanilla, and milk. Once mixed, pour the wet mixture into the dry mixture that is waiting in the other bowl.

In a large bowl beat together cake mix, oil, eggs, and milk with an electric mixer for a few minutes until batter is smooth. Spray slow cooker with nonstick cooking spray so the cake won't stick. Pour cake mixture into the slow cooker and smooth over the bottom. In a mixing bowl, beat together the 2 cups milk and pudding and pour over the top.

Set aside. In a mixing bowl, beat both sugars and oil to combine. Add in eggs and beat well. Gradually, add in flour mixture and milk. Alternating between the two. Mix until just combined. Don't over mix. Spread batter into prepared crock pot. Cover and cook on high for 2 hours.

To a medium bowl, add the flour, 1/2 cup sugar, 1/4 cup cocoa powder, baking powder, salt, and whisk to combine. Add the milk, oil, vanilla, and stir until just moistened. Turn batter out into prepared slow cooker and spread it into a smooth, even, flat layer. Evenly sprinkle the chocolate chips; set aside.

Directions for the cake: Mix together the sugar, flour, cocoa, baking powder and salt in a large bowl. Stir in milk, melted butter and vanilla until combined. Spread the batter over the bottom of a large crockpot. For the fudge topping: Mix together the brown sugar and cocoa. Sprinkle mixture over the cake batter.

Instructions. Place peanuts and white bark in your crock pot. Cook on LOW for two hours or until the chocolate is completely melted. Prepare a large baking sheet by lining it with parchment paper. Stir melted bark and peanuts together. Using a spoon, place spoonfuls of mixture on your prepared baking sheet.